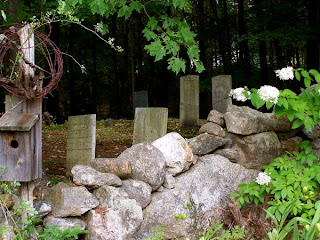 I like graveyards. More than I should, some would say. I’ve read book after book on these strange and mysterious places, I visit them whenever I can (one more reason why New England is such a great place to live), and I always slow down when I see them near the road, much to the annoyance of the drivers behind me. Sometimes I think I’m more at home in a graveyard than a mall full of people.

But maybe that’s because the dead are easier to talk to.

Over the years, I’ve seen countless graves, some elaborate, some just the facts, ma’am, some are only a stone without words. I think these blank faces sadden me more than the ones with words. Someone cared enough to mark the passing of a loved one, but could not afford to pay for a gravestone. Most likely it’s the grave of an infant or young chil who did not survive long enough to warrant the expense of a gravestone. That sounds coldhearted, I suppose, but when it comes down to buying a stone or feeding your remaining children, I think it’s only right to choose the living. The stone, unmarked, is still a memorial, whether it is fancy, or not. Someone cared. At least that’s what I like to think.

There are so many graves in this world. Children’s graves, mother’s who’ve died in childbirth, young men sent off to war, only to return home in a pine box. There are those who have lived decades beyond many of their peers, though such a long life was not necessarily a blessing. You can just tell by their gravestones that they were miserable old codgers. Mean in life, mean in death.

Others have a sense of humor about passing into the great beyond. Here are some funny epitaphs (I told you I was sick!)…

She kicked up her heels

And away she went.

Who was accidentally killed

This monument was erected

by his grateful family.

Who lived an old maid

But died an old Mann.

Over the centuries, countless gravestones have been knocked over, broken, or stolen. Others have simply sunk into the ground, slowly disappearing beneath a mound of thick moss. A fitting blanket for the resting soul. Perhaps the stone survives, but the writing has faded into non-existence, courtesy of the wind and rain. We may never know who lies beneath the grass. But then, there are a lot of dead who have been lost and forgotten.

Along with our new house, we acquired a graveyard. It’s a family one, with about seventeen gravestones. We managed to find one stone buried beneath the moss and leaves, nearly forgotten. Why were we the ones to find it when the previous owners, who had lived here for seventeen years, did not? Is there a story developing here? I wonder. Or is it simply a footstone, nothing special? Whatever the answer, it’s up to us to find out. Whoever it belonged to won’t be forgotten. Not on my watch!

One of the occupants died young – age twenty. Her tombstone is the most ornate of the bunch; she was obviously much loved. There are many tombstones here with the same name, or initials – a line followed, though sometimes broken. A few are children. How painful to consign a once warm, living being to the cold earth. I can understand the desire to lie down next to your beloved to keep them warm. Macabre, you think? Or human? On the other side of the coin, I have a relative who bought up twelve plots because she doesn’t want anyone to be buried by her. She will be the lone tombstone. Sounds lonely to me. No beloved will warm her plot.

There is no joy in a graveyard, yet they are not especially sorrowful, either. These idyllic spots always seem such peaceful places to me. That is, until a hand reaches up out of the ground and grabs my leg. But typically that’s no big deal. You just shake it off. They don’t mind. When my husband hides in our graveyard at night, while playing hide-and-seek with the kids, he swears he feels someone tugging on his leg. I tell him to stop being such a wimp, it’s only the spirits wanting to play.

My youngest son is glad that we bought this house because, “If somebody dies, then we have some place to bury them!” He’s a strange child – I don’t know where he gets it from. Okay, he gets it from his dad. Maybe a little from me. I do like graveyards, after all. Though here’s the funny thing. Even though I like them, I’m not sure I want to end up in one. I hate the idea of putting a lead-lined coffin into the ground – it’s so poisonous and unnecessary. I recently read about places that are eco-friendly, returning to the simple pine box of old. Hmmm… I like the idea, but I’m not sure I’d want to be buried someplace I’ve never been to. I’m also not sure I like the idea of being buried, and possibly still alive. There was a brief time when they would bury a person with a string attached to both the supposedly deceased’s hand and to a bell above ground – just in case they were still alive and needed to let somebody (who was hopefully paying attention) know. Of course, being incinerated, which is my other option, doesn’t leave much room for error, either.

Perhaps I will, like a wild animal, just crawl into the woods one day and die (provided, of course, that I live to a ripe old age and am allowed to die naturally). Under the shelter of a grand, old tree, my body will rejoin the earth, my flesh will become food, my bones, play toys for coy dogs.

It seems the ultimate way to give back and certainly better than being stuck in the ground or burned up. But that’s just my opinion. I might feel differently when I’m dead.

I’ll be sure to let you know…

The Scariest Challenge Ever!