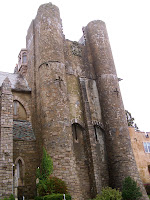 Well, not really. Wishful thinking on my part. But I did visit one this weekend, named…wait for it…Hammond Castle (cue thunder and lightning now!). As part of my October blogging spooky funfest, I thought I’d share my experience with you so that for once you’ll have to live vicariously through me instead of the other way around, which is what usually happens. Not only is this castle awesome, it’s located in the U.S., which means most of you Americans reading this won’t have to cross an ocean to see it. To add flavor to my blog (just a pinch of spice), I also want to share a couple of the strange things that happened to us while we were there. 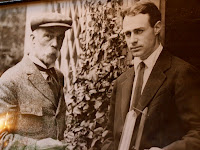 First off, I’ll tell you a little bit about the history of Hammond Castle. It’s located in Gloucester, Massachusetts, a beautiful town stretched out along the Atlantic Ocean. It was built by John Hays Hammond, Jr. (the guy on the right) between the years 1926 and 1929. A world traveler and inventor, he built this home for his new bride and also to accommodate both his artifacts gathered while traveling and his laboratories for inventing all his hundreds of inventions. Thanks to Mr. Hammond, we have the remote control. It if weren’t for him (and a few others) I might actually have to get up off the couch to change the channel, and that’s just wrong! You da bomb, John!

John Hammond was, at least in my (always) humble opinion, a very unique and interesting man. I think you’ll agree when you see what he did and what he created. Inside the castle, you will find one of my favorite places – a conservatory made to look like a town square. The main feature of this glass-ceilinged room is the gorgeous, plant-lined pool that can be filled with tap water or switched to seawater with just the pull of a lever. There is also an optical illusion in the pool that I’ll leave for you to discover when you visit. Fun fact: Back in the day, Mr. Hammond used to jump into the pool from one of the windows overlooking it, which would have been quite a leap from what I can see. If I had lived there, I might have tried it myself. Admit it, you would have, too.

The kids especially liked seeing all the weapons and the suit of armor, sneaking up 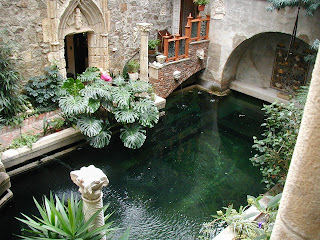 the spiral staircases that led to the turrets, and staring at the pool, wishing they could swim in it for just a ‘little’ bit. I was of the same opinion as my wee ones, plus I enjoyed visiting the rounded library, walking through the great hall and imagining this was mine, all mine!, studying all the old artifacts (including a skull, which I’m in the market for myself), and taking in the views overlooking the ocean.

I’m thinking of putting in a bid for the place.

Now comes the paranormal part…While we were there, my husband decided to take a picture of the two younger boys in front of the suit of armor. It was my middle child’s turn. While he was patiently trying to maintain his he-man pose, my husband was fiddling with the camera, which was not cooperating. Suddenly, my hubby looks up at us. 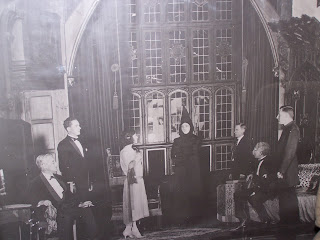 “That’s weird,” he mutters. “The words (or something close to this), ‘You are not authorized to proceed as it is not deemed to be a public photograph’ just came up on the camera screen.” We looked at him strangely, as we so often do, and he shrugs. “That’s what it says.” We don’t know what to tell him. Too bad it disappeared before I had a chance to confirm his report. At any rate, he finally got the camera to work and was able to take the pictures in front of the suit of armor without consequence (i.e., the ghost of John Hammond did not strike us down). Not long after that, I tried to take some pictures of my oldest son and the dang camera wouldn’t work. I kept pushing the button and finally had to turn it off and back on before it would work again. Now I know this can be put down to a mechanical problem with the camera (I’ll mention here that when we left the house, our camera was fully charged and working well), but those words coming up are hard to explain away. If this is something that can be debunked (yes, I watch Ghost Hunters), please let me know. It’s a Kodak, Easy Share DX6490. The strange thing is that I feel like I’ve heard about this before.

So what had happened here? Was it a ghost? Maybe. The camera malfunctioning? Possibly. Was it spooky? Most definitely. Good thing I like spooky.

As you can see, we always enjoy our visits to Hammond Castle. Every time I go I feel like I learn something new. For more information on the castle, click here. Keep in mind that they put on a Halloween extravaganza (which I’ve never been to and would like to try out) in the middle of October, closing the castle to regular tours during those few weeks. I advise that you call ahead. Also know that there is a nearby park (you pass it on the way to the castle) for rock climbing, playing, beach combing and picknicking. We typically visit the castle, then have lunch at the park. Though we’ve also hit a couple of the restaurants for yummy chowder, like we did this last time (since it was raining).

I’ll leave you with John Hammond’s words, written in a letter to his father in 1924:

“My ambition is to leave a modest, but beautiful, museum. I want only an authentic atmosphere, some furniture, and genuine architectural pieces — doors, windows, etc. In cold restrained New England, a place with the romantic beauty of the Italian and French past may prove the inspiration of many poor artists and students to come. It will give them something that I have been fortunate enough to know and enjoy. It also gives me satisfaction to think that I may be able to produce something of lasting worth.”

I believe he certainly accomplished that.

Where in the World is Harry Potter?