Just Thinkin’ About the Weather… 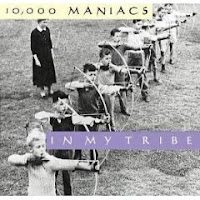 Have you ever listened to the 10,000 Maniacs? They’re a great group, or were, when Natalie Merchant was lead singer. Anyway, they have a song titled, “Like the Weather” on their CD In My Tribe. I even included a link so you can listen to a bit of it…Like the Weather. Just be sure to click on the right clip. It’s the third song down.

So why am I writing about the weather?

Here in Northern New England another snowstorm hit us overnight. First, it snowed a lot, then it rained on top of it. Then, when we had to clear our driveway to get to work and school, it started to snow again. The weather forecast called for an abrupt ending to the snow, anywhere from 6-9 a.m. It didn’t cease abruptly and it went on until 9:30! Now, Kristina, you say, what’s the big deal? Another half hour? Yes, but I started clearing at 7:00, people! By the time I was done, I had to re-do several sections. Plus, the snowblower didn’t want to blow the snow because it was the consistency of mud and when it did manage to blow snow, it blew it onto snow not yet blown, weighing those sections down until it was one large, immovable chunk. So we had to shovel that part. I lost three pounds in the process and gained a hernia.

I know I’m whining and I’m very good at it, but we’d just gone through a week of sunny skies and balmy temps in the 30s. Snow was melting, grass was appearing, our driveway was ice free and safe! No longer. The weather is messing with my head…again.

I guess that’s what I get for living in New England.

Hey, I said it first, so save your breath pointing out to me that maybe if I didn’t like winter, I should move. I do like winter, just not in January, February, March, and, God forbid, April. So there.

Still, at least this year I have my mom and husband to help out (the hubby usually manages to find a way to break a bone. No such luck for him this year). My mother is in her 60s and while she helps out, it makes me nervous. She is going to hurt herself and then I’ll have to be her nurse. That wouldn’t be pretty. There is a reason I’m not a nurse. It has to do with the fact that I don’t like people.

Then again…as I was shoveling the end of the driveway, along came a little machine with a plow and the young driver plowed the end of our drive for me. Bless him! There are good people in the world! I have seen the light!

Anyway, if you follow my blog, you know that at this time of year, not only am I just thinkin’ about the weather, I get a little obsessed by it.

We’ll see what happens this year. If you want to see someone make a slow spiraling descent into madness, pray for snow. Otherwise, join me and do the happy dance for spring to come now!

How Do I Get Motivated to Write?