January 30, 2009 / Kristina / Comments Off on Weird Happenings in New Hampshire

The other day I wa 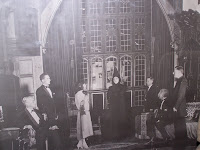 s in Portsmouth doing some shopping at the local health food store before meeting back up with my family at the restaurant where my niece works. It was my mother’s birthday and we’d just taken her out for brunch at the quirky Friendly Toast and were then going to stop briefly to see my niece. The others had gone ahead so that I could do my health store shopping sans children. Finishing quickly, I hurried on to meet them. I was walking down the sidewalk, minding my own business, jauntily carrying my paper bag full of healthy products,

“Excuse me!” a voice cried out from behind me. “Excuse me!” Thinking someone was in a rush and needed space on the slippery, snowy sidewalk, I moved over toward the building to get out of their way. Seemingly from out of nowhere, a female face appeared in the tiny space between me and the wall and a five dollar bill was shoved into my hand with the words, “Here! There’s more of that where that came from!” Then she was gone. Totally gobsmacked, I stood for a moment staring at the bill in my hand before swinging around to see what the heck had just happened. Lots of people were out that Saturday morning, filling the sidewalks, and it was hard to see where the woman had gone. I thought maybe she had joined a group and was hurrying away, but I couldn’t tell for sure. I hadn’t gotten a good look at her because she’d come and gone so quickly, but if asked, I’d say she was your average looking (meaning, no unusual tattoos, hair color, or piercings), American woman in her forties.

I was so stunned by her action that I didn’t even say thank you. Of course, I was also suspicious. Immediately I opened my purse, not to put the bill away, but to check my wallet. It was still there. So, this hadn’t been a trick to distract me, then steal my wallet. I began to walk again, tentatively holding the bill in my hand as though it might contain a bomb. After a minute, I decided to look it over. I examined it thoroughly and found no messages or phone numbers or websites scrawled on it. No blood. No bomb. It looked all right.

But I didn’t want it.

Right away I started searching for someone who would. A man waiting for the bus looked a little down and out, but he also looked grumpy. I figured that if I tried to give him money he’d yell at me, “Do I look poor to you?” and I would be forced to reply, “Well, yes, you do, sir. I thought you could use some money.” And Bam! that would be the end of me.

I wanted to live so I kept walking, hoping at the very least that I’d find a street musician working the crowd. Strangely, on a cold January morning, there was no such creature. Still dazed, my mind started going through all the possibilities of what this might mean. Was it a strange, grassroots version of Obama’s new stimulus plan? A reality television show taping what people do with the money a stranger gives them? If that were the case, I was determined not to look entirely idiotic with my paper bag and a five-dollar bill held out before me between two gloved fingers. I straightened my shoulders and walked faster.

The worst case scenario? Maybe, just maybe, I looked like I needed the money. Maybe that paper bag in my arm resembled a six-pack from the liquor store. Was that why she’d given me money? She thought I looked down and out? The Norwegian in me was horrified, and my husband didn’t help matters any. When I met up with my family and told everyone my story, he said that maybe my jacket had made her think I was a homeless person. I was wearing a navy blue peacoat. I thought it made me look distinguished. Apparently, I thought wrong.

Okay, so I’m pretty sure, despite my husband’s opinion, that I didn’t look homeless or needy. As much as I would like to be politically correct and say there is nothing wrong with looking homeless and needy, I won’t be hypocritical The only people who really want to look homeless and needy are the ones who are trying to scam you. I don’t think those who are truly homeless and needy want to look that way. Not being either, I certainly didn’t. The thing was, the woman ran me down to give me the money. She literally chased after me yelling, “Excuse me!” to get me to stop. What was it about me that prompted such unusual behavior?

My husband said he would have chased after her and demanded to know where the rest of it was since she had, after all, said, “there’s more of that where that came from.” I wouldn’t have done that. What if this had been a ruse to get me to follow her down a dark alley so that she and her gang could kidnap me and sell me on the white slave market? I don’t want to be a slave.

I ended up giving the money to my niece and she put it in her tip jar. She didn’t want it at first, but I told her she could pay it forward some time. She promptly took it. The youth are so much less suspicious than I am.

Anyway, I’m pretty sure the gesture was meant to be in good spirit – a simple, generous act. Too bad I didn’t take it that way, which says something about me, I guess. Too many times I’ve taken people at face value only to end up being ridiculed by them. This time, I was going to be careful. Of course, this time was probably the one example of someone truly being kind and not using me for a morning’s entertainment…Boy, I wish we could hear what that woman’s thinking right now! You probably just blew her mind, Beth!

For the moment, the event remains a mystery to me. If anyone has any ideas about what might have happened, please pass the information along. In the meantime, beware the five-dollar biller. You might just get free money out of the deal.