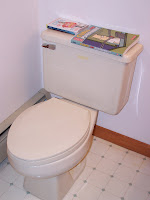 These are the latest headlines from our household. We have the stomach flu. Over the last several days, I have cleaned up a lot of liquids that have exited the body at brute force (topping speeds of 90 mph), from both of the main orifices, and from three of the four sickies (my husband has managed to make it to the toilet in time, thank the Lord). My oldest child has sometimes gotten the double whammy (both at the same time, poor thing). What a joyride we’ve been on! Today is day seven and I’m the fortunate individual who only got a mild version of it.

I’m just nauseous all the time.

I really just want to curl up and hide under the covers, but I am counting my blessings. One: I could be feeling the same way and still have to care for everybody. Two: Nobody puked at school or on the bus (though one of the kid’s friends did). Three: We’re saving on the grocery bill. Four: We could be living in a car.

Our puppy dog is going stir crazy. She’s always been public enemy number one to our cats, but now she has moved to terrorist status. She stalks them, waits for them to show their furry faces, and then attacks with a ferocious slobberfest. She doesn’t want to destroy them as a true terrorist would, but she does ignite fear in them because they don’t know she means them no harm. Their fur is clogged with spit, they’ve lost tufts of it all over the house, and they’ve had to run faster than they’ve ever had to run in their lives. Big Lou (our male cat) doesn’t like to run. That’s why he’s so big. Our one cat, Beanie, vacillates between thinking this is love (she’s very needy) and deciding those big teeth kind of hurt. Our last cat, Gypsy (a stray who adopted us), is smarter. She just stays out of the way.

To add insult to injury, the day before yesterday I was taking down comforter number twenty-five, which had been drying down in the laundry room (I had to wash it because someone puked on it despite everyone having an assigned bucket), which is also the furnace room, and saw a little red light glowing on the furnace. We had run out of oil. We have a strange set-up and cannot read how much we have in the tank and I don’t know how fast this house burns through oil (cause we only moved here in August) and there are more people using the hot water and it’s been unusually cold, too. So, we ended up spending a lot of money to have the oil company do an emergency delivery and re-start the burner. They were very nice, though, and hit us first on their run. Bless them.

Over these past several days, my boys have grown attached to their puke buckets. Literally, they’re kind of sticky. Ohhh…there goes the nausea again.

All right, that’s all from Sick Central. I’m not feeling so well…Where’s my bucket?