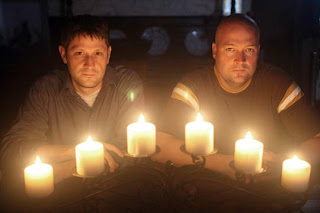 As part of my October blogging funfest, I couldn’t possibly leave out a review of one of my new favorite shows…Ghost Hunters. I got hooked on the show last season because of my mom. She needed someone to share her addiction so she taped a bunch of episodes for my husband and myself (at the time we didn’t get the Sci-Fi station because we’re frugal). That means we were able to watch several episodes, one right after the other. We got hooked.

And now we have Sci-Fi.

I blame my mother for our decision to get the extended cable package, just so we can watch Sci-Fi. It’s not something I would do for myself. It costs more money and I really don’t want the kids watching TV all day, or myself, for that matter. But since she’s living with us now, I figured we’d better keep her happy by making sure she had her favorite channels to watch. I did this all for her. It had nothing to do with my wants or desires.

That’s my story and I’m sticking to it.

Anyway, Ghost Hunters centers around TAPS (The Atlantic Paranormal Society), a paranormal research group that travels around the U.S. gathering evidence to either confirm or debunk a purported haunting. Jason Hawes and Grant Wilson run TAPS out of Rhode Island. Surprisingly, they are about as normal as you probably could get for 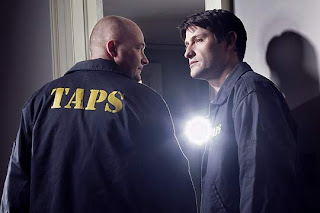 being ghost hunters. They seem to love what they do, but they are always happy to head home to their families at the end of the day. If they look tired to you, it’s because they are. They do all their investigations at night (natch), after working all day as plumbers for Roto Rooter.

Compared to a good portion of those working in the paranormal field, TAPS takes an unusual approach to their investigations. Their first priority is to debunk a haunting. That means they want to try and prove that what is happening is not paranormal. They appear to be very serious and dedicated to finding other explanations and are slow to call a place haunted. While they have both had their own paranormal experiences (which they won’t talk about), they are healthily skeptical and prefer to take a scientific approach to their investigations. I don’t know about you, but this makes me enjoy the show all the more. I guess it’s because when they do find something they think is a haunting, you feel like you can really believe them.

While ghost hunting, they use an array of technological devices to help them track down spirits (a.k.a. entities, full body apparitions, shadow figures, but rarely called ghosts). A few of my favorites: the thermal-imaging digital camera, which is used to record images often created by heat signatures that humans cannot see with the naked – or partly dressed – eye; a recorder that tapes EVPs (electronic voice phenomena), capturing voices or sounds ordinarily not picked up by the human ear; and K-2 meters, which measure magnetic fields. Oftentimes, the researchers use the K-2 meter to communicate with intelligent hauntings. I like watching it light up in response to questions, and not just because it’s pretty. You really feel like they’re having a conversation with the entity, or whatever it is. One time they asked a spirit, which was supposedly a 9-year-old boy, are you lonely? And he responded with a fervent, “Yes.” How did they know the spirit was a boy and nine years old? They asked him. 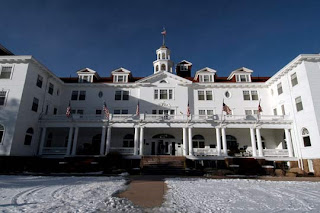 One of my favorite episodes happened right here in my own backyard at the Mt. Washington Hotel. A princess is purported to haunt the premises (I believe it is the Princess Clarigny de Lucinge). While doing EVP work, Grant and Jason captured her replying to one of Jay’s questions. He said something like, “Where are you?” and she replied, “I’m in my room. Where are you?” At the time, he couldn’t hear her, but later when they played the EVP recording, it was very clear – I could hear her perfectly.

The Princess is what you would call an intelligent haunting because she can interact with you. A residual haunting has no sense that you are there, just keeps repeating whatever it does over an over again. I once read up on a theory that postulates that we are not actually seeing or interacting with a ghost (the spirit of a dead person), but are crossing a time-space continuum. So the princess might actually have been 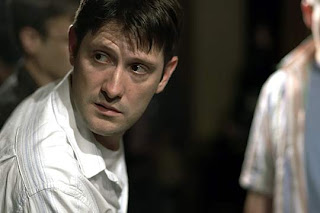 alive, but in her time, while Jay and Grant were doing their ghost search in their own time. It kind of makes sense to me, in a weird, fascinating sort of way.

I feel bad for the people who want ghosts and no evidence is found and vice versa, those who don’t want ghosts and several are found. Service places (restaurants, bed and breakfasts, bars) tend to like having stories to tell about hauntings. Having evidence to back up their stories always makes them that much more alluring. It’s kind of sad when TAPS does research (at the library, town hall, or on the internet), which actually shows that the stories behind the hauntings aren’t even close to being true. I think we all like a good story, and we all want to believe in that story. Their job is to debunk, which is good, but sometimes I’d rather be fooled. 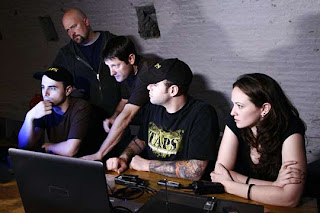 One of my favorite parts about Ghost Hunters is the interaction amongst the crew. Things seem to be more tame this season, but in previous seasons there were a lot problems to work out. As an unapologetic voyeur (though not the creepy type), I like watching conflict. Jay and Grant are funny guys, and Steve, the tech guy is a smart aleck if I’ve ever seen one. He likes to poke people and his current favorite target is Tango. Tango is such a sweet guy and probably a bit naive, but he is learning to stick up for himself. Interesting fact: Steve is scared of just about everything (heights, spiders), but he’s a ghost hunter. Go figure. Kris (the main female) serves as their liason to the customers and also goes on investigations. I like her, which is too bad. No conflict there. Sigh…

This sounds morbid (which I am), but I always like when they visit asylums, prisons, and places of that sort. Tons of activity is always happening in these buildings, most likely because there’s been a lot of suffering and death inside them. On Friday, 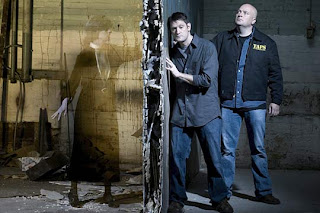 October 31st, starting at 7:00E, a special Halloween TAPS takes place at Fort Delware, a very active site. It’s supposed to be an awesome episode and you can participate in live feeds and all that fun stuff while watching. Plus, it’s hosted by Josh Gates, host of Destination Truth and one of my favorite television personalities. If you have trick-or-treating duties, you’ll have to Tivo it. We don’t have Tivo (we’re frugal, remember?) so we’ll probably have to tape it. Or go T-o-T’ing very early, which sounds better. Poor kids.

So, if you ever encounter a spirit, entity or things that go bump in the night, tell me, who you gonna call?